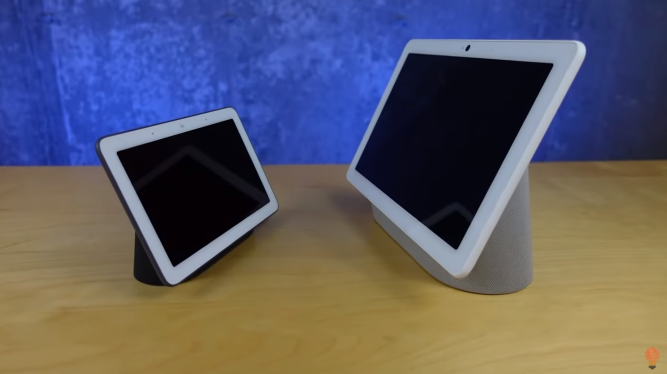 Google has been working hard for the last couple of months. It seems that the only thing that has not happened is that Groundhog day is not virtual yet. However, if you’re wondering what’s been happening on updates, you can watch it here on Automate Your Life

You can now see a whole new interface on Assistant-enabled Smart Displays. You can see more information after you select the time of the alarm such as Alarm tone, Sunrise alarm, and selecting the days of the week for the alarm. Now you can change the volume and the sound of the alarm tone directly from the front page of the alarm setup and select the lighting feature to turn on during the Sunrise alarm to create a sunrise effect. Snooze length as increased from 5 minutes to 30 minutes.

A new version of the Nest Hub. Google had released an FCC filing called A4RGUIK2 or Interactive Device GUIK2. The Interactive Device listing pointed towards the idea that Google is most likely updating the Nest Hub. It looks like we’ll get more details about the new Nest Hub in mid 2021. There is focus on Soli, so, is this device going to help you with Fitness and Wellness, and when you’re asleep?

You’ll notice that the Wellness section in the Google Home or Google Assistant settings now include functions for sleep. Sounds like Google is working on a device that will help you sleep, wellness, and fitness. Interesting.

You can now run Tasker Tasks from Google Assistant

We found last week that Tasker tasks can now be run from Google Assistant. You can watch the video from the developer of the Tasker App in the article.

You can now ask Google Assistant to turn on Guest Mode. This does not mean that everything the Guest asks for is not logged. If they access apps, the apps can track and log activity. However, it does give more options for people visiting your home to activate and manage the smart home while you’re gone.

Google was not directly visible at CES 2021. However, they were able to show off their tech through other vendors. TCL talked about a new Google TV system through the new lineup of TCL TV’s. You should be able to use most of the apps you can use with the new Google TV, like Google Duo. Can’t wait to see what else shows up!

Sony has also announced that Google TV will be available on all their new TV’s (Sony Bravia XR Lineup). Sony has also developed new Smart Speakers that should have full Chromecast capability. They should be available in mid-2021.

JDL released the Tour One and Tour Pro+ headphones that should also support Chromecast.

New Gesture support is going to be available. You’ve probably heard of the double-tap feature. Android 12 phones will come with the ability to take actions or activate Google Assistant with a double-tap of the back of the phone.

The new Android 12 will give you the opportunity to pick and choose which apps can run on the home network. So, those apps that can actually work offline are actually not using your network. This helps users to add extra security to their mobile devices as well.

Yes, Google Assistant’s voice command function broke down on February 2, 2021 (9to5Google), if you tried to use voice commands to turn on and off your devices, you were given a response like this:

It looks like that device has [not] been set up yet. You can do that in the Google Home App.

But, you know that the device was set up in the Google Home App. So what gives? You were able to activate the lights using the toggles in the Smart Displays or your Google Home App, just could not use your voice.

There are rumors that Google is building a new Foldable Phone for the Pixel lineup. GizmoChina released an article stating that they saw a filing with the World Intellectual Property Organization (WIPO) under numbers 2021/011949 and 20210018961. The patents show the different hinge designs that could work with the rumored Pixel foldable phone. We saw an intricate hinge design on the Surface Duo (operates Android OS). Let’s see.